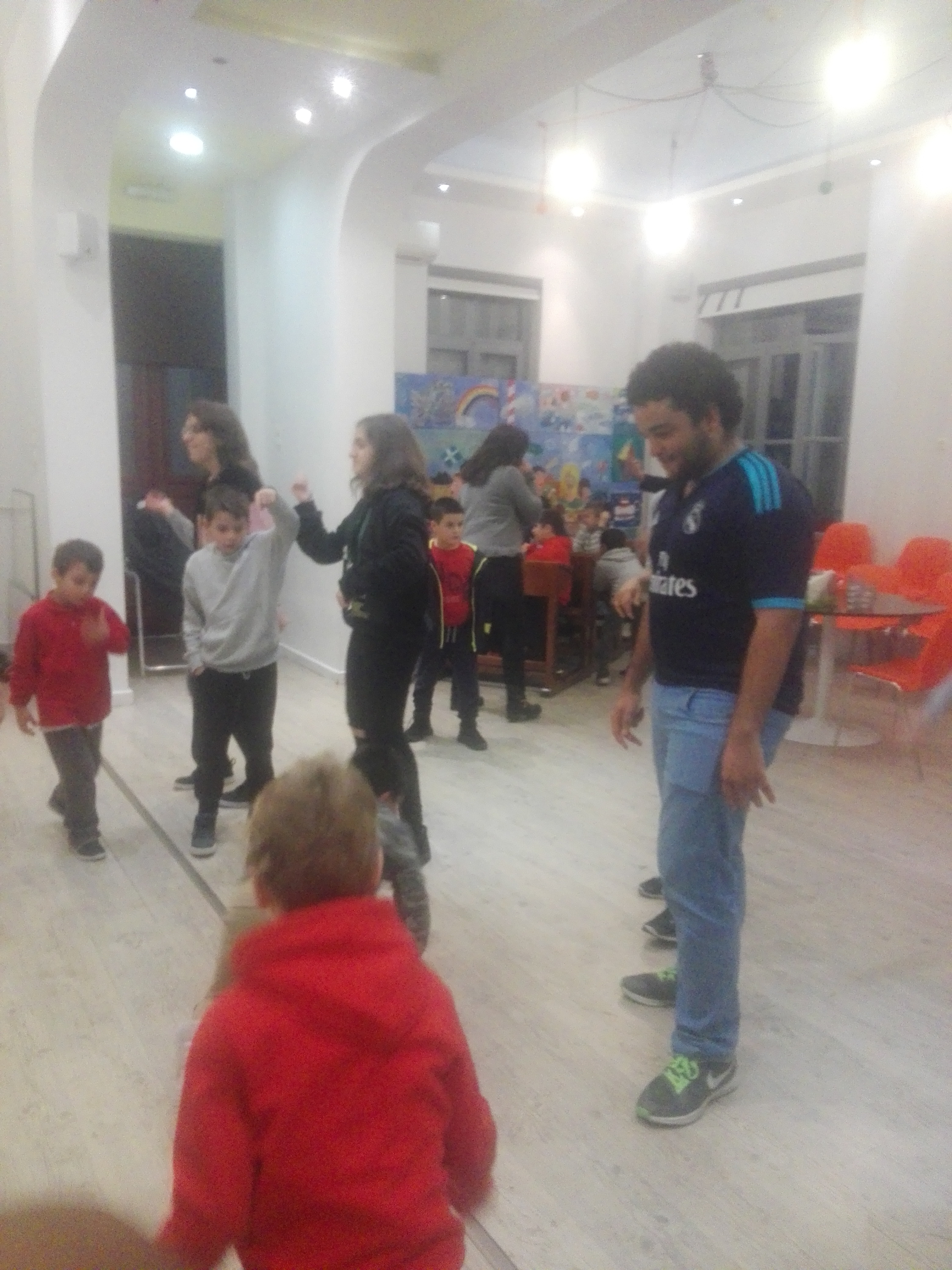 On Thursday morning, we all had a nice breakfast at the hotel and left to the Melissa Network of Migrant Women in Greece. It is a network for migrant and refugee women living in Greece. We had a long discussion with Nadina and other people in the center, with a delicious cake made by a Nigerian chef followed by some music with the children. After having lunch with them in the center and wrapping up with some music with the children, we depart to our respective refugee camps to teach dance.

Some of us somehow wanted to go back to the Eleonas camp, but we were told to go to another children’s center, Apostolis, with my group. Apostoli is not a refugee camp but a center for Greece migrants of poor family. The center is a lot different than the Eleonas’ camp. A beautiful building, so many resources, a lot of facilities, attractive compound. This time we weren’t asked for our passports and there wasn’t any one by the door, we just opened the door and walked in. We found a space inside and a number of children whose number is higher compared to Eleonas’. We were told that these children have a better English than Eleonas but not really. However, the good thing was, they all speak a common language, Greek, and we had an interpreter who made our life easier. Luckily, we found everything set, fantastic speakers, and a computer connected to the wifi. As the class size was a bit too much, we were struggling on handling the children, some of them were annoying as a kid and some of them engaged with the dance.  A couple of us was working on the music part and handling the children to stop distracting others and making them follow the steps while two of us teach the dance. Handling them was hard with the language barrier since some of them were very small kids and don’t know how to follow steps, all they want is running around.

In general, in Apostoli, we felt completely different than Eleonas. Apostoli children get a much better treatment, better life. After two hours of dance class we left for our hotel and dinner.

On the next morning all were very excited for the Acropolis, fully charged our cameras for many pictures. Luckily the day was so bright and made us all happy. Admiring the beauty of the museum and the acropolis for a couple of hours, we depart for lunch and to the Apostoli camp in the afternoon.

This time we had less number of kids but there were more younger kids who made our day exhausting. Yohannes made the warming ups and a small children’s dance while the other teammates get ready for the dance. Watching when they all follow your steps is satisfying but when the younger kids run all over the place and distract other children was annoying. Every time running after them and struggling to calm them down was the most exhausting work we had on Friday. In general, we had a nice experience. After Apostoli, we went to the city plaza hotel camp, where many refugees are found.

Videos of the rehearsals at the Apostoli Community Center can be found here.