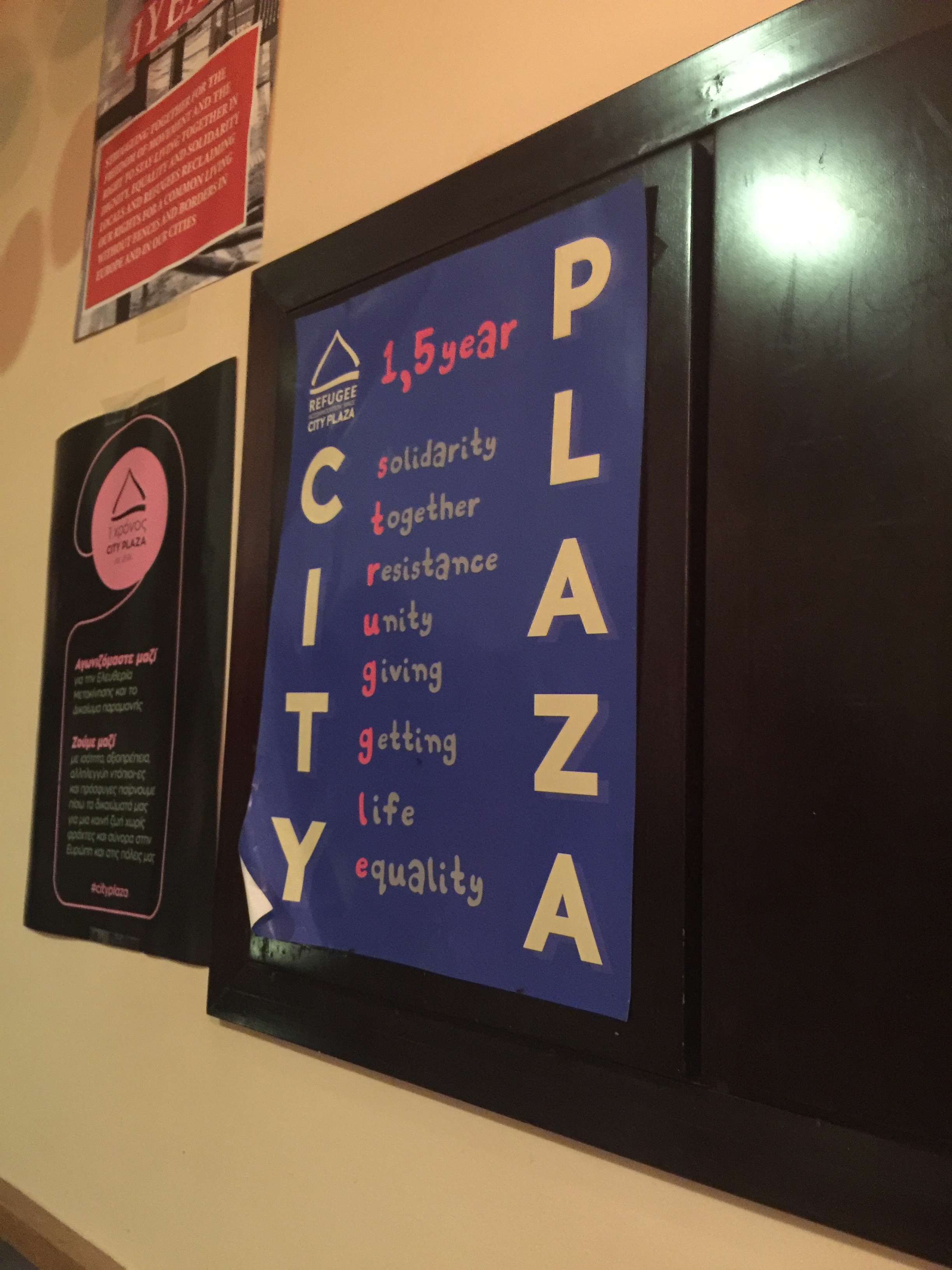 City Plaza Hotel in the Media

As a means of providing a better understanding of what the City Plaza squat is and represents in the context of the refugee crisis in Greece, we decided to provide different perspectives concerning the origins, purpose and vision of City Plaza Hotel in the media.

Although these articles do not represent our opinion, they do provide an idea of what City Plaza Hotel is. From these articles, we have understood that City Plaza squat is in a legal limbo, since the occupation of the hotel is considered illegal by the Greek authorities.

To provide a different perspective on City Plaza, we would like to share a little bit of our experience there. Arriving at the hotel, we first went to the bar area and ordered some tea and cookies. The bar area was a very social space where both volunteers and refugees were free to interact, chat and hang out. I noticed that there was a small shelf with books in Arabic as well as different signs indicating the dates when different activities would take place. Based on these signs, I realized that it seems that there are many activities going on at the hotel, from English and German classes to music lessons. It is noteworthy that all these activities provide a platform for the refugees to further engage with the community, hence allowing them to become more involved and to have a sense of ownership over the space. Therefore, I believe that the activities had a bigger purpose rather than simply distract people from their problems.

For children, I noticed that they were not really allowed to hang out at the bar area. Actually, there was a sign saying that they were not allowed to stay in the area. Besides that, one of the volunteers was telling one of the children to leave the space when she was interrupting our discussion. To be honest, I was very curious as to why children were not allowed to stay in the space. One of the possible explanations is due to the fact that there were many people smoking inside the bar area. Furthermore, it was noticeable that there were many men around the area, so it is possible that some parents don’t really like their children to be around the bar area.

Bearing this in mind, I find essential to promote activities at the hotel that allow for children to go out of their rooms and enjoy their childhood. An example of activity that allowed that was Aakash’s dance workshop and our dance party. Near the bar area, we all gathered with Aakash in order to learn new moves. The children and some adults were trying to imitate the moves. Suddenly, there was a lot of positive energy in the space and everyone seemed to be very happy and excited. Then, after learning some moves, we started playing different songs and each person was dancing in their own, unique way. I remember seeing a lady from Congo who was so happy to hear Waka Waka while dancing with the African students in our group. She had so much energy and was so excited to see other people from outside.

Naturally, the children were extremely excited to dance with us. Saying goodbye was really hard because all the kids seemed to be so moved by our willingness to spend time with them there. I remember that one of the volunteers walked with us until the entrance and said ‘thank you’ many times, and really emphasized how much the kids loved the workshop and the dance party.

As someone who was very skeptical about our trip to Greece, I feel that this particular day really shifted my perspectives in terms of the importance of what we did. I know that the children at City Plaza are still there, and we did not ‘save’ them. That was not our intention. Our intention was, however, to connect with them – and we did! Although some of us may underestimate the importance of such connection, it is very possible that, for some of the children, the evening when a bunch of college students from everywhere walked into City Plaza to dance with them will remain in their memories forever. In a nutshell, the outcomes of the connections we made cannot be measured. Maybe we will never really be able to quantify the positive outcomes. Yet, we can all hope that there will be positive outcomes resulting from the amazing interaction we had at City Plaza, a remarkable place where so many people found shelter and, perhaps, a new, temporary home.